Zanzibar and the Islands

The famous spice island with exotic smells and outstanding beaches... 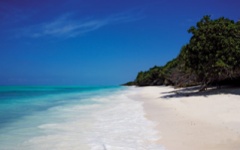 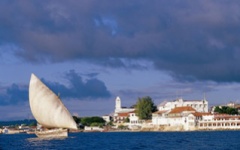 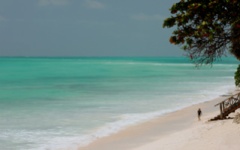 Made famous for its spices and the slave trade of the 19th century, Zanzibar Island is much more than a stopping point on an itinerary, and can be seen as a destination in itself. What the island offers is a unique combination of outstanding beaches, along its eastern edge, interesting activities, such as visiting a working spice farm, and the cultural delights of Stone Town, with Arabian fortresses and minarets.

Roughly speaking, the island is a fairly undeveloped affair with only around 5 main roads, all leading back to the main town, Zanzibar, on its western edge. This simplicity makes it the perfect destination for those that are looking to explore a little as, should you reach the beach, you know you have gone wrong!

Geographically, the island is only around 40mks across and 100kms from north to south at its widest points. Featuring outstanding, powder white beaches along its eastern shores, flanked by barrier reefs, and the UNESCO World heritage site of Stone Town on its western edge, the island itself (Unguja in Swahili) is fairly narrow, with a ridge running through its middle from north to south. Along its eastern coastline runs a protective barrier reef and then the Indian Ocean. This is where the best beaches are located, all with coral white sand and gently lapping waters.

Along the western side of the island runs the Zanzibar Channel and is where the main town (Zanzibar Town) and where the famous UNESCO World heritage site of Stone Town are located. While there are a few pockets of good beach along this western edge (namely around Kendwa), this side of the island is not really seen as being the place to go for the beach-bound.

With its location, barrier reef and outstanding beaches Zanzibar can offer all of the attractions that most crave such as scuba diving, glorious beaches, fresh seafood and much more. For those that are a little restless there is a small forest in the interior called Jozani that has indigenous red colobus monkeys, and the spice tours in one of the small farms just outside Zanzibar Town are a fascinating glimpse into why this island has become so famous.

For a quick run through of the main beaches and lodges please see below.

A great beach and arguably the best "active" area on the island.

Right on the northern most point of the island, the beach that surrounds this area is truly stunning. Azure waters and white sands are what await those that come here. The only drawback really is that many of the hotels have had to perch on the coral cliffs that run north from the village and, as such, lose their beaches at high tide.

Generally, however, this is not a problem and, with the small backpacker community in the village, this is a great place to head if you like to get out of the hotel for a drink or two.

An idyllic beach with the best sunsets and most deserted beaches.

Only a few properties have managed to locate themselves on the western side of the island. The main reason being that there are relatively few beaches that are worth locating on...Kendwa is the one exception. Looking out to the island of Tumbatu, the beach here is one of white sand dropping off into azure ocean.

Good at all times of day, they don't have the same issues as on the other side of the island where the beach is very shallow and so the tide retreats huge distances.

As we say, however, there are annoyingly few good properties here and so, while it is a great beach, we can only offer it to a select few (possibly a good reason to like it even more!)

One of the up and coming beaches on the island, the beach here is wide and sweeping.

Matemwe village, on the north eastern coast of Zanzibar, looks out to the small and exclusive island of Mnemba. Unlike many of the other beaches on the island it has stayed relatively untouched by tourism until recently.

It is possible to see why this beautiful and expansive beach has become so popular. As with many of the beaches on Zanzibar, it is true that the tidal range is very large and so the beach really becomes vast at low tide...but it is still possible to swim here throughout the day and, when the tide comes in, it really is of a paradise.

As we say, it has become a little busier in the last year or so.

A long and untouched beach that runs for 20 kms.

The beach that runs down this part of the island is, as with the Matemwe beach further north, very typical of Zanzibar. At low tide it forms a wide band of white that runs out to the seaweed farms and, finally, to the deep water channel and the barrier reef. At high tide, the waves come right up to the edge of the palm covered land that spreads back to the main road.

There are plenty of really good properties along this strip and, without being too overcrowded (as with some of the other areas), this is one of our favourite areas on the island. With probably the best beach on the island at Pongwe, there is very little to fault choosing one of the properties here. The only drwaback, one could argue, is that there are no real centres to head for if you are after more than just a beach.

A forgotten region that boasts reasonable beaches and spectacular diving.

As mentioned above, this is, very much, an area that is awaiting development by all accounts. Generally not reknowned for its beach coastline, many who head to the area are after the great diving and snorkelling that is on offer from the shoreline.

There are, however, quite a few benefits to coming down here. The first is that the beaches, when they are accessible, are totally your own. The second is that, with fewer people heading down here, you can have utter seclusion. The last is that, of all the beaches, this is the easiest and quickest to get to (excluding Fumba!).

The other main beach on the island, this is open beaches and swaying palm trees.

Driving north from the small town of Paje runs you along what is one of the most popular beaches on the island. The range of hotels and lodges along here is probably the most diverse in Zanzibar and, with a great beach pretty much throughout the day, it is very hard to go wrong with your choice.

We have many properties that we recommend highly along this stretch of coast, in particular the cluster that is centred around Breezes. Here the beach is only compromised at low, low tide, the rest of the time it is possible to snorkel and swim as you like.

The one criticism that we would have is that the diving is not as good as up on the north, around Mnemba, or down to the very south.

Where to go in Zanzibar and islands:

Located in the Old Quarter of the main town, Zanzibar, “Stone Town” (as it is often called) is certainly an interesting place to spend a few hours. Made up of a myriad of winding streets and alleyways, the region was declared a UNESCO world heritage site in 2000 for its remaining Arab and colonial...

Our top five hotels & lodges in Zanzibar and islands:

Our recommended top travel itineraries for Zanzibar and islands: